Genotyping-by-sequencing (GBS) was applied to populations and approximately 17,000 SNP markers were used for GWAS for multiple traits, including: blast and bacterial blight resistance, salinity and submergence tolerance, and grain quality.

The eight parents, 200 S4 Indica MAGIC lines, and 190 MAGIC PLUS S4 lines were genotyped using genotyping by sequencing. These genotypes were used to estimate recombination fractions, linkage disequilibrium, and ancestral haplotypes. Preliminary analysis suggests that LD decayed to background levels within 10 cM, indicating high levels of recombination in both populations. (NOTE: Hei will provide an Excel document with the results of this genotyping and this could be linked to a Dropbox file or equivalent)

For mapping of new QTLs, the MAGIC population was used to identify resistance to brown spot and bacterial leaf streak diseases. This new genetic resource promises to be a valuable source of breeding-ready materials for the development of higher-yielding rice varieties.

To determine the yield stability and performance of MAGIC lines, an S2:4 bulk population (400 lines) was evaluated under irrigated lowland conditions using a row-column design in a multi-environment trial (MET) with three sites in the Philippines and one site in Tanzania. Yield data showed considerable transgressive segregation for yield relative to the checks and the founder parents (N. Bandillo, unpublished). Based on yield and agronomic performance in the first MET, 130 lines have been included in a larger MET with sites in the Philippines and Vietnam. Yield data were analyzed using the additive main effect and multiplicative interaction model (AMMI) and GGE biplot. The AMMI analysis of variance for yield detected significant effects for genotype, environment, and their interaction (G × E). The environmental effect explained the highest variation, indicating that the environments were diverse, followed by G and G × E effects. Based on AMMI stability value and yield stability index, lines were identified with high yield across locations. 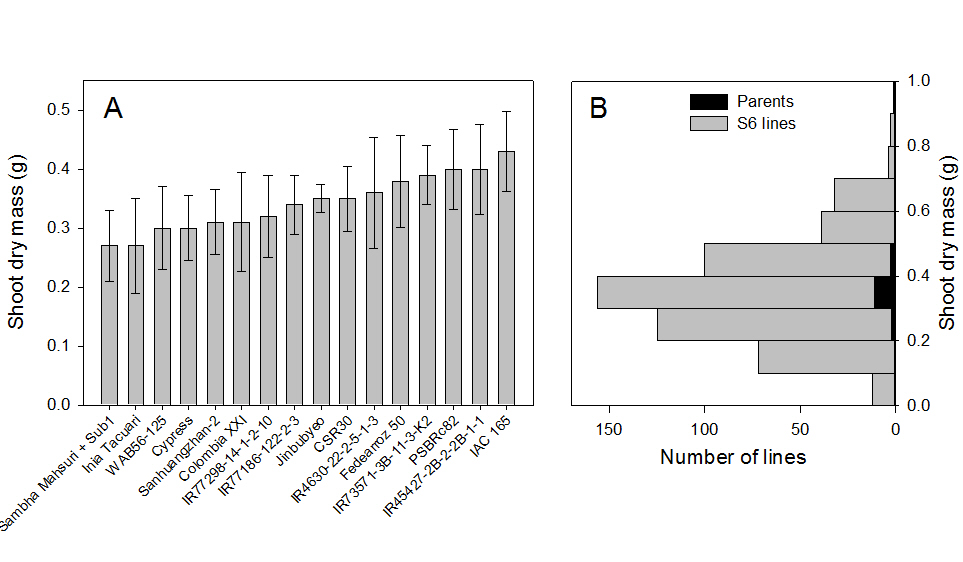 The indica MAGIC population is now being used in the rainfed ecosystems in Southeast Asia. In the growing season of 2014, 54 elite lines are being grown in multiple locations with different environmental stresses:

We have organized an internal MAGIC database to be integrated into the Breeding Information Management System (BMS) that will be launched at IRRI in 2014. This database contains the phenotype and genotype data of the MAGIC lines in Excel Access. [ NOTE: I have discussed with Hei; this will be made available soon apparently]