The BMS in number: a measure of impact

The BMS has evolved considerably over the past 5 years into a robust and highly relevant data management system for breeding programs around the world, especially in Sub-Saharan Africa where considerable progress was made under the auspices of a Bill & Melinda Gates Foundation grant that concluded towards the end of 2019.

The primary aim of the project was to enable national programs, CGIAR centres and Small-Medium-Enterprise (SME) plant breeding programs serving Sub-Saharan Africa and South Asia to use modern breeding information management, decision support and DNA marker technologies to increase the rate of genetic gain, productivity and quality in staple food crops. By the end of 2019 the project had very successfully met, and exceeded, the overall objective of incorporating the BMS into more than 100 plant breeding programs in Sub-Saharan Africa across a range of crops and breeding programs.

Since the end of the project, significant continued support has been received for BMS development and deployment under the CGIAR, through sub-grants, funded by the Gates Foundation, from the Excellence in Breeding (EiB) platform. 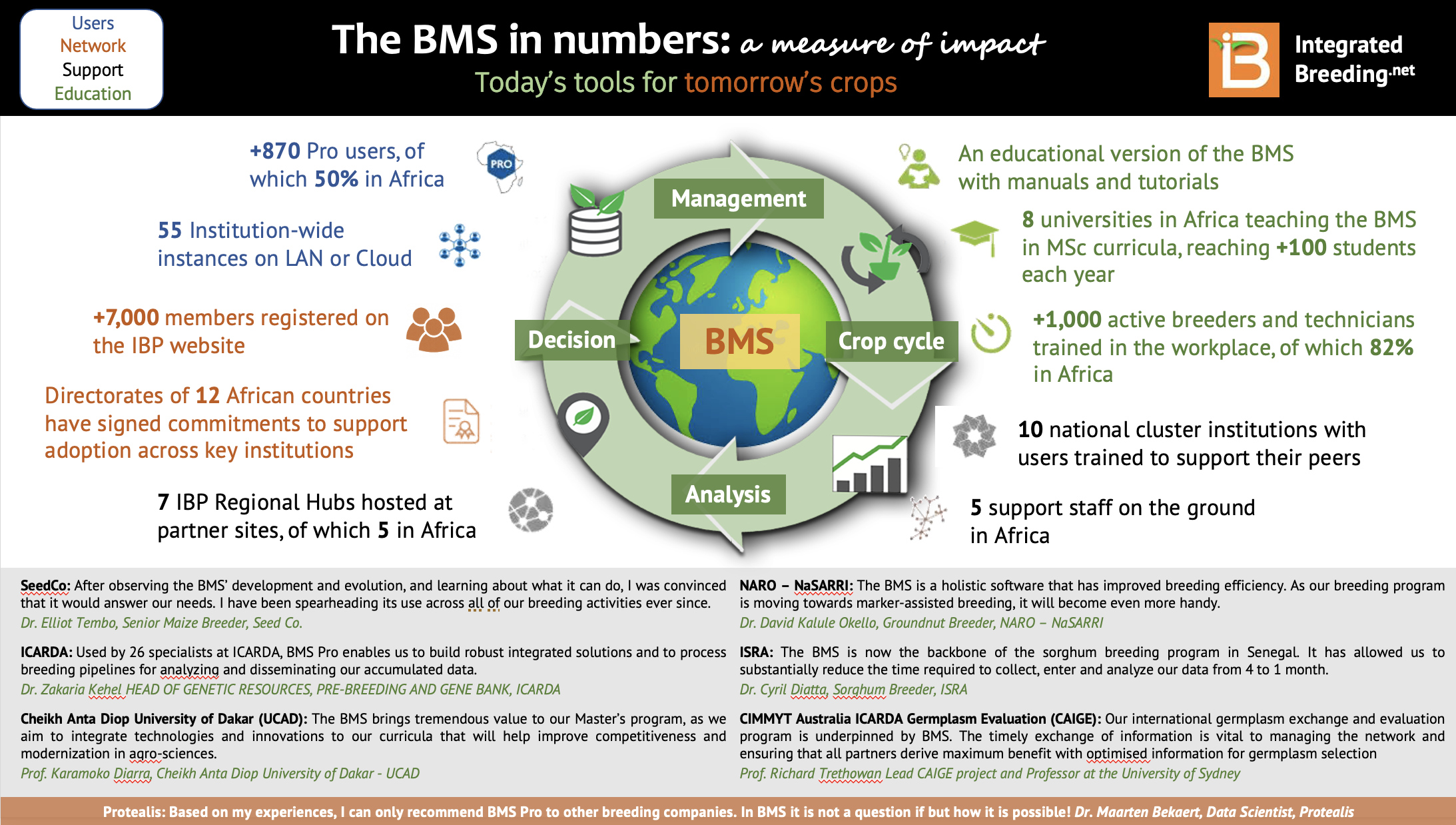 The BMS is an easy to use, flexible, modular, and differentiated system that has been adapted to manage, in a single instance, a wide range of crops (and species) and some BMS instances are hosting more than 30 different crop databases (NARO Uganda). For example, it is being used for regional crops of importance, such as fonio (small grain millet) in West Africa, it is also used by vegetable, fruit and cash crop breeders, and for a range of cereals and legumes. The BMS is easy to install and maintain, either locally or in the Cloud, and at an institutional level it promotes local ‘ownership’ of data, facilitates retention of institutional ‘memory’ and, critically, builds local capacity.

The BMS is being actively developed with major new functional improvements added to the system over the last 12 months. Especially exciting and noteworthy enhancements include: the ability to edit and merge germplasm records; the ability to upload files and photos and associate them to your germplasm and/or plots; and, a completely revamped list management module with greatly enhanced functionality for filtering, sorting, and selecting records. The germplasm editing feature gives authorized users complete control over all of the details of a germpasm record including the names, groups, and pedigrees as well as for merging duplicates. Any changes made to a germplasm record are stored in an audit table, providing a complete history of any changes made. Any number of photos and files can be linked to germplasm records as well as to plots, giving BMS users the ability to create a library of images and/or descriptive data of their studies and germplasm collections. Navigating all of the diverse information available in the BMS is now much easier with the enhanced list management interface that provides great flexibility in sorting and filtering entry lists following the same model used for germplasm, inventory, and sample lists.

Quite unique to the BMS is the flexibility of our software to bring data in and out of our DB, and the potential to link with existing or new modules/Apps. Indeed, the development of the BMS has followed an API (application programming interface) architecture and adopted the BrAPI standard, enabling integration of modules developed by partners elsewhere (e.g. FieldMap developed at the Boyce Thompson Institute and FieldBook from Kansas State University). BMS users with IT knowledge also have access to RESTful APIs that can be used to extract (from the BMS DB), transform and load data into a different database where custom analyses or SQL queries may be conducted. REST (representational state transfer) APIs can also be used to integrate the BMS with a range of external solutions.

You can explore the available services at:  https://bit.ly/37xuvtI

The BMS and Public partners

In 2021 we have grown from 40 instances to 53 instances (Fact Sheet: Working with the IBP). Twenty seven (27) of these are on IBP hosted Amazon Web Services (AWS) systems, with almost all using Docker Container technology to ensure privacy and integrity of client data. A further 16 instances are maintained at client sites on their LAN systems or on their own AWS servers. We have 12 new clients on our own AWS servers and 3 new clients on their own systems.

As reported in Newsletter #1, the IBP and the EiB are working together to maintain momentum, to secure the hard-won gains in digitising breeding programs in the CGIAR and partner national programs, and to set the scene for adoption of the EBS (Enterprise Breeding System) by the CGIAR Centres. The BMS is currently in use in routine by all or selected programmes at 5 centres (AfricaRice, CIAT, ICARDA, ICRISAT, IITA) and we are also supporting BMS deployment and use for their national program partners. The BMS will continue to be an important tool for the CGIAR Centres during the transition phase of the adoption of the EBS by Centres and, equally important, the BMS will continue to be the tool of choice in the medium- to long-term in supporting institutional efforts at the national level.

The IBP has been supporting national programs in Africa for more than a decade with experienced, local support teams (both through the former GCP and now, the IBP). Including partners both within and outside the CGIAR system, the BMS is in use at 21 national programs: Africa (Benin, Burkina Faso, Ethiopia, Ghana, Kenya, Ivory Coast, Mali, Malawi, Mozambique, Niger, Nigeria, Senegal, South Africa, Uganda, and Zimbabwe); Latin America (Brazil, Colombia and Uruguay); and Asia (India, Philippines and Thailand).

Two new projects in Eastern and Southern Africa have started with the USAID Feed the Future Innovation Lab for Crop Improvement (ILCI): Centre of Innovation for Crop Improvement (cowpea) for East and Southern Africa (CICI-ESA) based at Lilongwe University, and the East African Centre of Innovation for Finger Millet and Sorghum (CIFMS), led by the National Semi Arid Resources Research Institute (NaSARRI) in Uganda. Germplasm and trait data have been loaded into programs in the BMS of the host institutes and functional training and cycle preparation have been conducted using remote training methods. These projects are also supporting national BMS installations at DARS (Malawi), IIAM (Mozambique) and TARI (Tanzania). A third ILCI project in west Africa: Crop Innovation in West Africa (CIWA) led by the Institut Sénégalais de Recherches Agricoles (ISRA) in Senegal (affiliated countries- Burkina Faso and Niger) is using the BMS for work on cowpea, millet and sorghum. All three ILCI Centres of Innovation in Africa have opted to use the BMS for breeding data management. The Innovation Centres have been established to drive new tools, technologies and methods for crop improvement at the regional level.