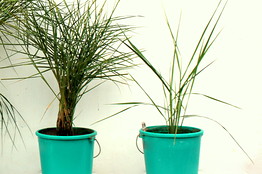 has successfully bred a new variety of salt resistant rice by crossing the exotic  wild rice species Oryza coarctata and the common rice variety IR56 of the cultivated species Oryza sativa, parents that are far-removed from each other in the genome sequence, in a research initiative dating back to the 1990s. O. coarctata is extremely difficult to cross with cultivated rice varieties as its location in the rice genome sequence is at the other end of the spectrum from that of rice varieties such as IR56. A single plant born out of these unlikely parents opens the possibility of farmers growing rice on land normally unusable because of salt from nearby seas.

Unlike regular rice, the new rice line, being called 'super salt-tolerant' rice, can expel salt it takes from the soil into the air through salt glands it has on its leaves.The lead scientist on the project Dr. Kshirod Jena says that the new variety will have double the salt tolerance of other rice.

Oryza coarctata grows in brackish water and can tolerate a high salinity concentration (similar to that of seawater), whereas current cultivated salt-tolerant rice varieties can cope with only half that concentration. Hence,  Oryza coarctata has a level of salt tolerance that is twice that of cultivated varieties. But while the superior salt-resistance of Oryza coarctata (which does not produce edible rice) was known, it was extremely difficult to cross the wild rice species with cultivated species.

"When we cross two types of rice with genomes so far off from each other in the genome sequence, the resulting embryo tends to abort itself,” observed Dr. Jena; "We've been trying to backcross these types of inter-specific hybrids since the mid-1990s, but we have never been successful, until now."

Dr. Jena revealed that of the 34,000 Oryza coarctata-IR56 crosses — or hybrids — that were made, only three embryos were successfully 'rescued'. And of the three, only one germinated to produce a single plant that scientists had to literally  treat like a baby, transferring it into a liquid solution to ensure its survival, he added.The plant was then grown in the field, where Dr. Jena and his team used it to backcross with IR56 – to ensure the progeny will contain more of the desirable traits of IR56 while retaining just the salt-tolerance of Oryza coarctata. IRRI scientists are now working to perfect the new rice variety to ensure it meets the needs of farmers and consumers. It is expected to reach farmers in four to five years after further improvement and testing. It could help increase rice acreage in several countries where coastal land (sometimes delta land) available for rice cultivation goes unused due to high salinity. "This variety will make saline-stricken rice farms in coastal areas usable by farmers," says Dr Jena; "These farmlands are usually abandoned because the encroaching seawater has rendered the soil useless. That means livelihood lost for these communities."

Rice is the major staple food for more than half of the human population.

PS: The Generation Challenge Programme has provided significant funding for work on salt-tolerant rice. This GCP Blogpost  features Bangladeshi scientist Zeba Seraj, Principal Investigator on one of GCP's salt-tolerance projects, who has mentored many upcoming scientists,

This article is adapted from a piece published on the IRRI Website, on Monday 15th April 2013, at the site Oryza on Tuesday April 16th 2013 and a similar article by Cris Larano published in the Wall Street Journal SouthEast Asia Realtime https://www.integratedbreeding.net/news/breakthrough-salt-resistant-rice-research-single-baby-rice-plant-may-hold-future-extending-rice/editon Wednesday April 17th 2013 .