Cassava is crucial to the food security of millions of 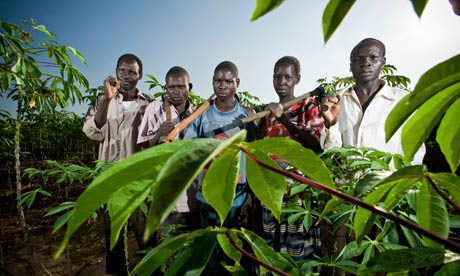 people in sub-Saharan Africa, but historically it hasn't had quite the same level of attention or research that maize, rice and wheat have. That is now starting to change, with new varieties of the plant addressing some of its nutritional and physiological shortcomings and helping to transform cassava into an African cash crop with a more versatile role to play in development.

Africa produces more cassava than any other crop, according to FAO figures: in 2011, it produced 140 million metric tonnes, compared to 65 million tonnes of maize. Easy to grow in poor soils, with few inputs, it has long been an important and cheap source of food. "Cassava provides a source of livelihood to about 300 million people in sub-Saharan Africa," says Kenton Dashiell, deputy director general for partnerships and capacity development at the International Institute of Tropical Agriculture (IITA) in Nigeria. "It is produced mainly by small farmers, who are often women heads of households, and who generally use traditional farming methods. It is relatively tolerant of poor soils and seasonal drought and can be safely left in the ground for seven months to two years after planting and then harvested as needed."

Although important, cassava has well known disadvantages: improperly treated roots and leaves can contain cyanide, causing ill health in people who might already be malnourished. And while a good source of carbohydrate, the root of the ordinary cassava plant has relatively low nutritional value, which is problematic when populations rely on it as a staple. However, new varieties are now addressing some of these shortcomings. In late 2011, for example, the IITA presented three new vitamin A-enriched cassava varieties, developed with the Nigerian National Root Crops Research Institute. It's expected that these new varieties – known as UMUCASS 36, 37, and 38 – will have a significant impact on the widespread problem of vitamin A deficiency in large populations who rely on cassava in their daily diet.

Another interesting variety currently being researched at the International Centre for Tropical Agriculture (CIAT) in Colombia is the "asparagus" cassava. Ordinary cassava plants are fairly squat and bushy, but the asparagus variety – discovered by chance in the course of the centre's research – is quite different, standing up to almost 10 feet high in a sturdy column. The potential benefit of this slim, high-rise plant is that it can deliver greater yields in a given area. Trials are due to start in May this year, which will look at how the variety performs in high density settings. If it performs well, the improvement will be akin to the improvements previously achieved with maize.

"It is the capacity to tolerate crowded planting conditions that can, in a way, explain the consistent increases in maize productivity during the last 100 years," says Hernan Ceballos, a cassava breeder at CIAT. "We hope to achieve the same with this asparagus cassava. Today we plant 10,000 plants per hectare and each plant produces 1.5 to 3 kg of root, or 15 to 30 t/ha (tonnes per hectare) of fresh root. If the asparagus cassava yields, say, 1 kg per plant when planted at 40,000 plants per hectare, then we are talking about 40 t/ha. That is the general idea and what we hope."

If results are promising, CIAT may push for the release of the variety immediately, though some fine tuning is likely to be needed. "Most likely, we'll have to make crosses to have a larger population to select from and then be ready for releasing a commercial variety," says Ceballos. "That means probably 6-8 more years. But it will be on the certainty that the high-density approach works."

Yields and nutritional quality are both important factors from a household food and nutrition security point of view, but efforts are growing to develop cassava as a cash crop in sub-Saharan Africa too. This value chain is already well established in south-east Asia, for example, where cassava is produced on a large scale for use in industrial starch, ethanol and root chips for animal feed.From that perspective, yield still matters, but so too do other qualities. "Our efforts in recent times have been focused on developing cassava along the value chain," says Dashiell. "Yield is important, but we are also looking at other qualities such as dry matter content for processing into starch or high quality cassava flour."

In January this year, for example, the Nigeria, the worlds highest producer of the root crop, released two improved cassava varieties UMUCASS 42 and UMUCASS 43, which both have high dry matter levels and are good for producing starch and high quality cassava flour. The varieties were developed through a collaborative effort between the International Institute of Tropical Agriculture (IITA) and the Nigerian National Root Crops Research Institute (NRCRI).

But one enduring problem for cassava is that it rapidly spoils after harvest. There are two potential ways round this: grow a longer-lasting form of cassava, or process it quickly.

Research shows that high-carotene (yellow) cassava roots, which are useful for their better nutritional value, also happen to last longer after harvest – up to two months, rather than a few days. Unfortunately, the starch content doesn't last that long, but it does last longer than usual, adding a crucial few days to the root's usefulness for processing. Those few days can make all the difference to producers. "If a truck breaks down, or there are demonstrators blocking a road, the roots would have to wait two or three days," says Ceballos. "That's enough for post-harvest physiological deterioration to spoil the roots, and it's a 100% loss."

Another approach is to speed up processing by bringing the processing facilities to the farm, which is happening in Kenya, Uganda and Tanzania through Farm Concern International's AGRA-funded Cassava Village Processing Project. The project has seen 54,000 farmers in 214 villages participate in "village based processing units" where mini industrial processing units (mobile chippers) have enabled producers to turn their crops into chips to dry and sell on for further processing, creating a steady income source and improving household food security.

Cassava research has been going on for decades, but growing market interest in the crop has quickened the pace of research in recent years, according to Ceballos. "We've been aggressively mining cassava germplasm in search of useful traits, in response to interest from different markets," he says.

Though market-driven, the impact of that progress goes beyond improving the crop's potential as a cash crop. As well as boosting yields, nutritional qualities, and resistance to certain diseases, there are also varieties which are known to simply taste better. For the development sector, this means cassava is rapidly becoming a more versatile tool than it once was, better able to address specific objectives in localised contexts.

This article is adapted from a piece by Caspar van Vark published in The Guardian on 28th March 2013, and a story by Neil Palmer in the CIAT website on 22nd February 2013.