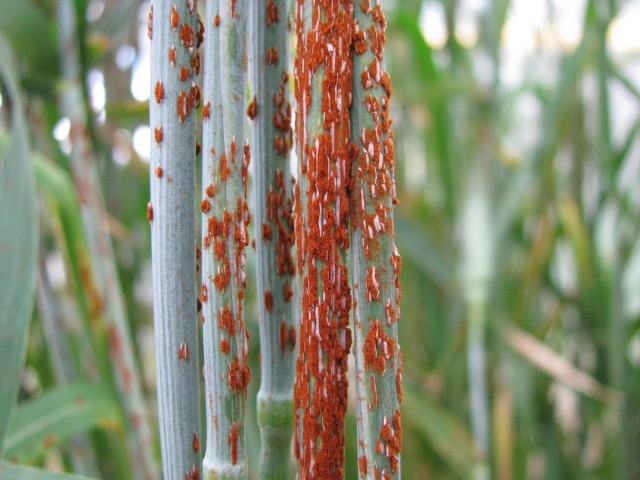 in Uganda in 1999, has overcome most resistant wheat varieties and is threatening major wheat production areas. Stem rust is a fungal infestation that appears as reddish blisters on wheat.The blisters contain millions of spores, which infect the plant tissues, and disrupt the crop's ability to produce grain,  causing severe yield losses.

About 90% of wheat grown around the world is susceptible to Ug99, a form of black stem rust that can wipe out whole harvests. Experts predict it could spread rapidly through Africa and the Middle East, and possibly further afield, potentially causing an agricultural disaster that would affect global food security.

By working with uncultivated relatives of agricultural wheat, two teams of scientists have identified a pair of genes, each of which provides partial resistance to the Ug99 strain of stem rust. The two international groups from the United States, China and Australia (working from Kansas State University and University of California-Davis in the US, and CSIRO Plant Industry, Canberra, Australia) investigated two wheat genes - Sr 33 and Sr 35. They inserted them into modern wheat varieties, and confirmed that wheat with these genes showed enhanced resistance to to stem rust.

The identification of these two genes from a wild relative and a less-prevalent relative of commonly grown improved wheat offers new possibilities to slow the spread of the Ug99 fungus and to deploy more sustainable resistance in farmers' fields. As the researchers report in two separate papers in the journal Science, their work opens the door to the use of biotechnological approaches to develop wheat with both genes that could slow the progression of Ug99 and avoid global wheat shortages. The discoveries will also lead to a deeper understanding of how plants fight back against the pathogen and allow scientists and breeders to establish new and more sustainable ways to defeat it.

Although each gene can be bred back into commercial wheat strains to impart the requisite resistance, the combination of the two is likely to be even more potent. Given that resistance genes are typically overcome by the pathogen when deployed one at a time, having both Sr33 and Sr35 is more likely to provide full resistance to Ug99 and limit the stem rust fungus from evolving tolerance a second time. The cloning of the genes will enable scientists to combine them, facilitating the advantageous deployment of both in a single plant, and the stacking of the two different genes with multiple resistance specificities would then provide a more durable resistance.