Cassava is planted on about 16 million hectares, with 50 percent in Africa, 30 percent in Asia, and 20 percent in Latin America. Total root production is around 152 million tons.

Under favourable experimental conditions, cassava as a monocrop can yield as much as 90 tons of fresh roots per hectare. But it is usually grown in poor soils and harsh climates and in association with other crops, such as maize, beans, or cowpeas. Under these conditions average yields in tons of fresh roots per hectare are much lower: 9.6 tons worldwide; 7.7 tons in Africa; 12.7 in Latin America; and 12.9 in Asia.

in the 16th century. Today, it is a dietary staple in much of tropical Africa. It is rich in carbohydrates, calcium, vitamins B and C, and essential minerals. However, nutrient composition differs according to variety and age of the harvested crop, and soil conditions, climate, and other environmental factors during cultivation. 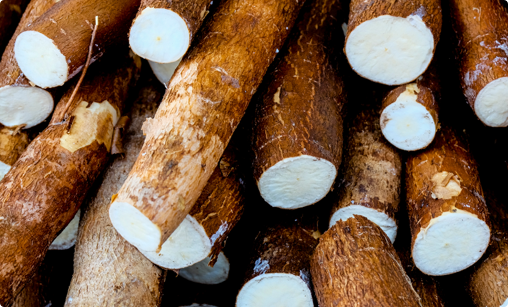